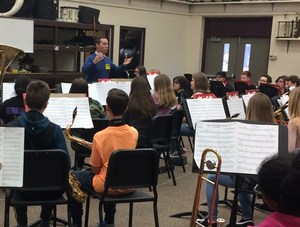 Dr. Christopher Heidenreich from the University of Michigan-Flint directs our band in preparation for Band Festival on March 2nd.
The Linden High School Band recently had its Pre-Festival Concert in preparation for MSBOA District Band Festival.  Dr. Christopher Heidenreich, Director of Bands at the University of Michigan-Flint, was a guest conductor for the band as a part of the preparation.  The band will compete in the festival at Swartz Creek High School on March 2nd.
Students also competed in the District Solo and Ensemble.  Of the 20 solo and ensemble performances by Linden students, 10 received the highest rating-- Division 1.  These students are eligible to perform at the State Solo and Ensemble on March 18th at Lapeer High School.  The remainder received a Division 2 rating out of five possible rankings.